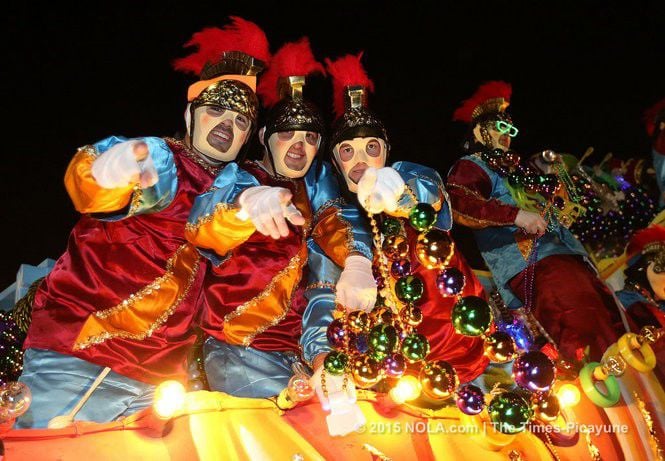 The Krewe of Endymion rolls down the traditional Mid-City route with their parade "Fantastic Voyages" on Feb. 14, 2015. (Michael DeMocker, NOLA.com | The Times-Picayune) 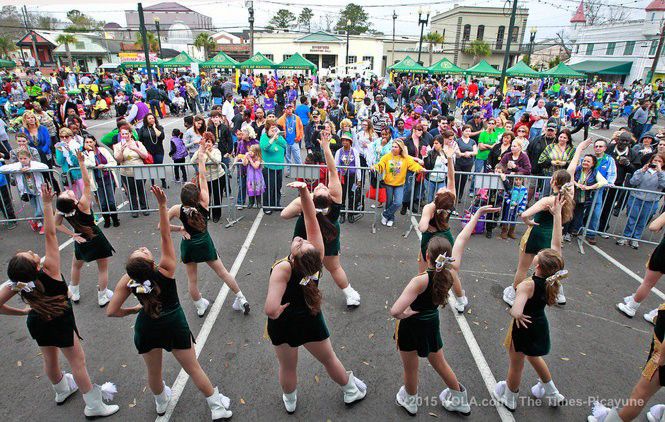 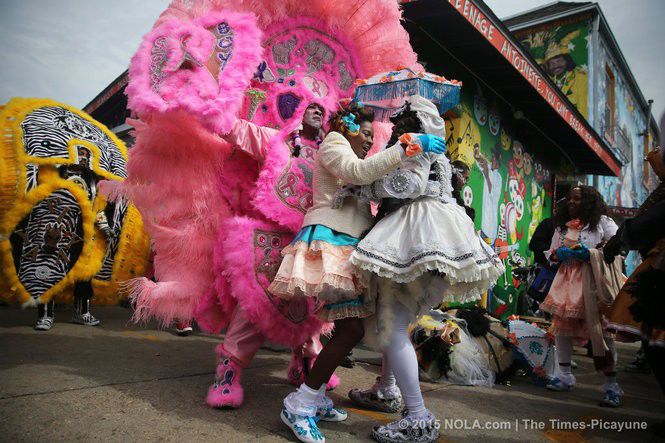 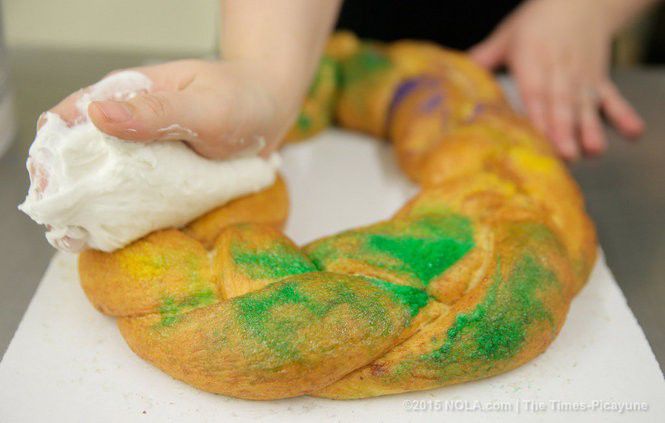 On Kings Day, the king cake season is in full swing at Nonna Randazzo's Bakery near Mandeville, Wednesday January 6, 2016. The original Randazzo king cake has been baked for 50 years. (Photo by David Grunfeld, NOLA.com |The Times-Picayune) 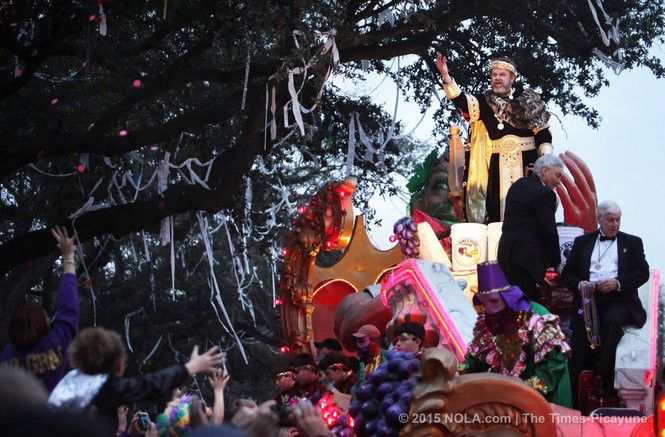 Actor Actor John C. Reilly reigns as Bacchus XLVI as the Krewe of Bacchus, the fourth and largest of Sunday's parades in New Orleans, rolls down the traditional uptown parade route on February 15, 2015, to the theme, "Children's Stories That Live Forever." (Photo by Kathleen Flynn, NOLA.com l The Times-Picayune) 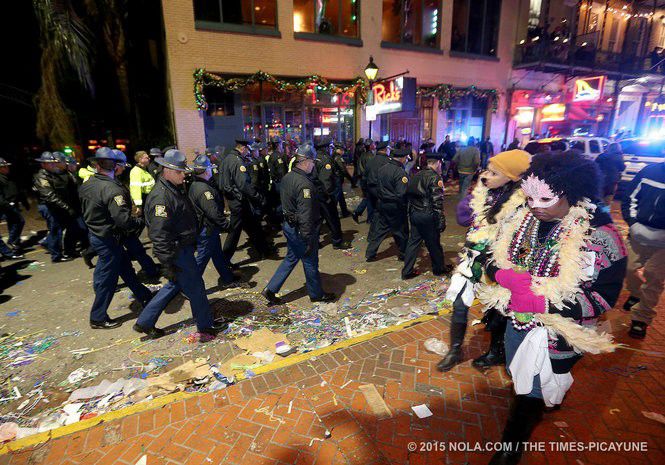 Revelers move aside as members of the police, EMS, and fire departments make the traditional sweep of Bourbon Street at midnight to mark the close of the Carnival season in New Orleans on Wednesday, February 18, 2015. (Michael DeMocker, NOLA.com | The Times-Picayune) 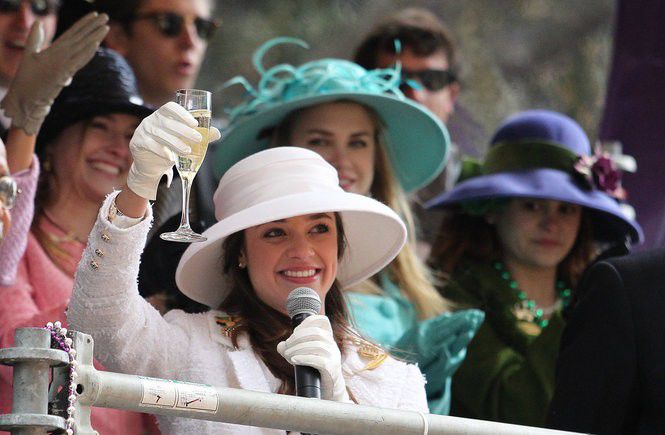 The Krewe of Endymion rolls down the traditional Mid-City route with their parade "Fantastic Voyages" on Feb. 14, 2015. (Michael DeMocker, NOLA.com | The Times-Picayune)

On Kings Day, the king cake season is in full swing at Nonna Randazzo's Bakery near Mandeville, Wednesday January 6, 2016. The original Randazzo king cake has been baked for 50 years. (Photo by David Grunfeld, NOLA.com |The Times-Picayune)

Actor Actor John C. Reilly reigns as Bacchus XLVI as the Krewe of Bacchus, the fourth and largest of Sunday's parades in New Orleans, rolls down the traditional uptown parade route on February 15, 2015, to the theme, "Children's Stories That Live Forever." (Photo by Kathleen Flynn, NOLA.com l The Times-Picayune)

Revelers move aside as members of the police, EMS, and fire departments make the traditional sweep of Bourbon Street at midnight to mark the close of the Carnival season in New Orleans on Wednesday, February 18, 2015. (Michael DeMocker, NOLA.com | The Times-Picayune)

The march to Mardi Gras is back, and we're ready with everything you didn't know you needed to know.

With all the raucous good times to be had, there's still plenty to plan. From knowing where you'll park for Krewe du Vieux to deciding whether you're more sidewalk side or neutral ground, there are a lot of questions to answer even if this isn't your first Mardi Gras.

Here are some details, suggestions and links to help you groove through it it all with style, so practice your throw-me-something-misters, strap the kids into their ladder seats and ice down some brews. It's Carnival time.

* What is Mardi Gras? Mardi Gras, or Fat Tuesday, is the day before Lent begins. In the Catholic faith, the Lenten season starts on Ash Wednesday. It is traditionally a time of fasting, prayer and moderation. Mardi Gras is essentially a big celebration of earthly delights before the 40 days of abstinence and reflection of Lent. Get more answers to the frequently asked questions of Mardi Gras.

* Why does the date of Mardi Gras always change? To answer that, we'll have to work backward. Easter is celebrated after the first full moon following the spring equinox, but it must fall on a Sunday. The moon doesn't follow the Gregorian calendar, however, so Easter shifts between March 22 and April 25. Once you know the date of Easter Sunday, count 40 days back to Ash Wednesday, the beginning of Lent. The day before that is Mardi Gras. One thing doesn't change: King's Day (also known as Twelfth Night and Epiphany) is always on Jan. 6 and celebrates the day the three kings arrived to shower gifts upon a newborn Jesus. The means the Carnival season, which runs from King's Day to Mardi Gras, various in length.

* When did it all start? It's a hodgepodge of history, featuring a cast of characters that includes a pope, some pagans and guys who like dressing up.

* What's 'Cajun Mardi Gras?' Much of southwest Louisiana celebrates Mardi Gras a little bit differently. Known as the "courir de Mardi Gras," which translates the the "Fat Tuesday run," the Cajun celebration comes from longstanding tradition, French heritage and a little imagination. Most events are private or semi-private, but there are public events in Eunice and Mamou you can join. Louisiana Travel also has a good guide for finding public events.

* What actually happens on Bourbon Street on Mardi Gras? Lots of fun for adults, like dancing, drinking and the annual costume contest known as the Bourbon Street Awards, which honors the best in drag, leather and group costumes. At the end of it all, just after midnight on Ash Wednesday morning, law enforcement officers sweep the area and send everyone home.

* Kid friendly fun: Mardi Gras and the parades that populate it are mostly family-friendly. Those that can be raunchy -- like Krewe du Vieux, for example -- and are not suitable for the youngest family members tend to stick to the French Quarter. Those that travel Uptown, in Metairie or on the North Shore or West Bank are great options for families. The largest audience comes out for evening parades, so head out earlier if you'd like a lighter crowd. If you do venture down to the Quarter, the boozy scene tends to stick to Bourbon Street. Remember to talk to your kids about staying safe and what to do if they get separated from the group.

* How do people make those fancy ladder seats? You can make your own by following these instructions from a blog post over at Mom's Minivan. If you're not feeling crafty, the seats can also be purchased online through ParadeSeat.com, which you'll have to attach to your own ladder.

* Mardi Gras Indians: You may not have your costume idea nailed down yet, but Mardi Gras Indians have been busy beading the intricate pieces of their suits for months. They'll be unveiled on Mardi Gras Day, when the Indians step out their front doors to take to the streets with music, chanting and challenges to see who's the "prettiest" chief around. The Indians, who do not stick to an announced schedule, nevertheless draw big crowds.

* Get your costume in order: Mardi Gras costumes tend to stray toward the politically pointed, punny or outlandish. Anything goes, but wear some kind of costume, otherwise you'll be left feeling serious costume envy. (Heck, you'll feel it anyway, no matter what you do.)

* Know the banners: It's not just you that needs to be dressed right. Homes dress the part, too. Know the Mardi Gras krewe banners you'll see on houses around town.

* Eat king cake: Cinnamon-laced and sugar-topped purple, green and gold king cakes are traditionally eaten from King's Day (Jan. 6) until Mardi Gras, so snap one up at a local bakery and be prepared to get the baby. The tiny plastic doll indicates who's job it is to buy the next round -- of cake, that is.

* Where to eat along the route: It's parade go-time, but the inevitable has happened. You've been too busy partying Uptown to remember to eat and now it's too late. You'll have to pick something up on the route.

* Know the parade schedule: If you're traveling to New Orleans, the biggest weekends are the final two leading up to Mardi Gras. These are the most jam-packed with parades and events. Likewise, if you need to get around town, make sure you plan for plenty of extra time to navigate the routes as you could get stuck behind a wall of stopped traffic. Here's the full schedule for the New Orleans metropolitan area.

* Don't miss the big ones: Although some of the smaller walking parades are true gems and can be the most fun, the biggest, showiest parades are not to be missed. Make it a priority to see Muses, Endymion and Bacchus, which are known as the largest and flashiest krewes.

* Fat Tuesday: The actual day of Mardi Gras is parade-heavy earlier in the day, with Zulu and Rex rolling before noon in New Orleans. Truck parades follow them, which are great fun for families. For those wishing to see and be seen in costume, the place to be is in the Quarter, where small walking krewes and groups of friends showcase their best cheeky, punny, saucy or clever designs.

* Know the rules: New Orleans has a few rules in place specifically for Mardi Gras revelers. Among them:

* Inside the NOPD: The New Orleans Police Department is charged with keeping the peace, which can be a pretty big task during the largest party of the year.

* Happy Mardi Gras to law enforcement: The officers of the New Orleans Police Department are local residents too, and Mardi Gras is a holiday for us all. Remember that when you watch Det. Winston Harbin do the wobble in this video that went viral in 2014.

* Love your bartender: Look, we know it'll be busy at local bars, but that doesn't mean you can't show a little love to the folks pouring your drinks.

* Will my car get towed? Tow trucks and police enforce all parking regulations in neighborhoods near parade routes, and they especially keep an eye out for those who have parked within 20 feet of crosswalks, intersections and stop signs or blocked driveways. Also make sure to park with your passenger side toward the curb in the direction of travel. If you are parked in a driveway, don't block the sidewalk. Parking on the neutral ground is also forbidden.

* What if my car does get towed? So you didn't pay attention to all those warnings and got your car towed. Next, you'll have to get down to the city's impound lot. It's at 400 N. Claiborne Ave., which is underneath Interstate 10. To get your car back, you'll be required to pay the parking violation fine, the cost of any outstanding tickets, a $161.25 towing fee and a $19 per day storage fee.

* My friends may have gotten arrested. How do I find out? OK, we may not all have been there, but we know that things happen. If a friend got arrested, you can search for their names through the Orleans Parish Sheriff's Office Inmate Master Search.

* Going to a Mardi Gras ball? Here's what you wear: Society writer Sue Strachan knows that it can be daunting to interpret the dress code on Mardi Gras ball invitations. She demystifies the process.