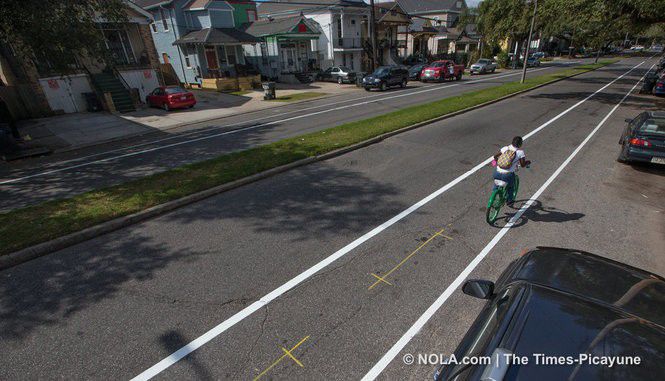 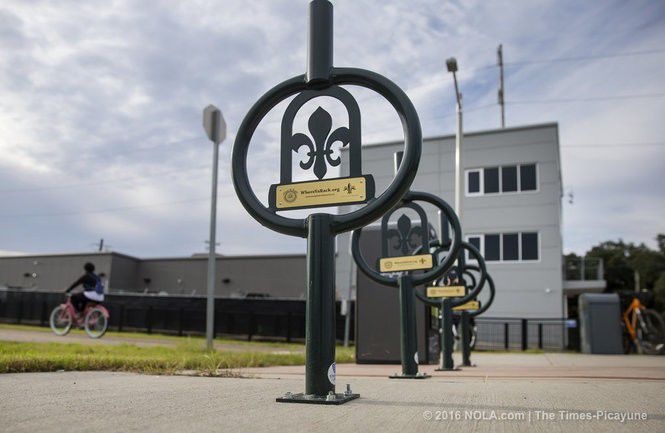 Bike racks near Camp Bow Wow on the Lafitte Greenway in New Orleans on Thursday, January 26, 2017. (Photo by Chris Granger, Nola.com | The Times-Picayune) 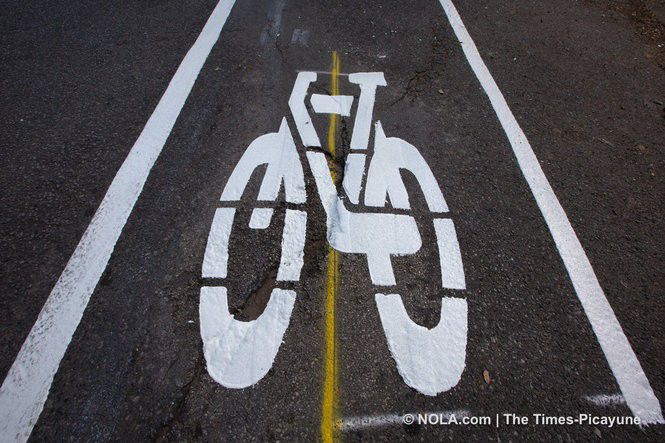 Bike racks near Camp Bow Wow on the Lafitte Greenway in New Orleans on Thursday, January 26, 2017. (Photo by Chris Granger, Nola.com | The Times-Picayune)

Pros know a positive Mardi Gras experience boils down to logistics. For many in New Orleans, that involves dusting off their bicycles and pedaling to the parade route to avoid getting trapped in parking hell.

How can bicyclists and drivers share the road to Carnival safely?

Dan Jatres, pedestrian and bicycle program manager for the Regional Planning Commission of New Orleans, and Dan Favre, executive director of Bike Easy, said bicyclists have to follow traffic rules and be aware of their surroundings. The same goes for drivers, they said.

"Bicycles are vehicles, too, and they have the same rights and responsibilities as other vehicles on the road," Jatres said.

Bike Easy will be hosting a pre-Mardi Gras bicycle tune-up and safety station from 4-6 p.m. Wednesday (Feb. 8) at its offices at 2100 Oretha Castle Haley Blvd.

Can't make it for a tune-up? Here are safety tips for bicyclists and drivers during Mardi Gras and all year long.

Consider a driver making a left turn onto a roadway divided by a neutral ground. The driver is unlikely to look right for oncoming traffic until they have reached the neutral ground. That means they probably won't see a bicyclist riding against traffic to their right. Jatres said bicyclists riding with traffic, on the other hand, are rarely hit from behind.

Follow traffic signs and lights. That means stopping at red lights and stop signs and yielding to turning vehicles with the right of way. "All the normal rules apply," Favre said.

Install front and rear lights. You took the time to attach that nifty cup holder to your handlebars. Spend the extra buck to get bicycle lights -- a white light for the front and a red light for the back. Not only do lights allow cars to see you better during nighttime rides after parades, but Louisiana law requires them.

Wear a helmet. Louisiana law only requires kids ages 12 and younger wear helmets, but it is a good idea for everyone.

Favre noted there is some debate in the bicycling community over helmets as a safety tool. While they can (and do) offer key protection, they can also create a false sense of security for both bicyclists and drivers. One 2006 study found drivers tend to pass more closely to helmeted riders, who they perceive as safer and less vulnerable. Favre noted a helmet alone is little help when you do not follow other basic safety tips.

Signal turns and stops. Signal a right turn by pointing to your right. Point to your left for a left hand turn. And put your left arm at a 90 degree angle with the hand pointed downward to signal you are stopping.

Plan your route. Bicyclists who know where they are going are less likely to make the erratic turns and stops that can cause collisions. Take time to map a route to the parade before getting on your bike. Bike Easy has a free, downloadable map of dedicated bicycle and shared lanes citywide.

Lock your bike in a safe spot and be courteous. Use a metal U-lock to lock your bike frame to a rack or another sturdy, stable object. A cable lock can be looped around the frame and wheels for added security. Make sure locked bicycles do not obstruct sidewalks.

If you're locking your bike to a street sign, make sure it has a sign on top and is securely attached to the ground. Also, be courteous of private property; not everyone is cool with bicycles locked to their fence or balcony poles. If you cannot check in with the owner, move on to a more public spot.

Where Ya Rack, an Young Leadership Council initiative, keeps a regularly updated Google map of its public bicycle racks.

Be vigilant of your surroundings. Mardi Gras means streets littered with cheap (and often wet) plastic things. Keep an eye out for debris on the ground that can catch spokes, chains and tires.

Most New Orleans roads have street parking. Maintain a safe distance -- roughly 4-5 feet -- from parked cars and watch for people turning out of a parking space or swinging a car door open.

Beware of streetcar tracks. Anyone unlucky enough to have been thrown from a bicycle thanks to a tricky track can testify it hurts both body and pride. Always cross tracks at a 90-degree angle to prevent getting a tire caught. Be extra careful when it is wet outside. As a side note: it is illegal to bicycle down the paved streetcar lines in the middle of Canal Street.

Don't bicycle through parade crowds. Get off your bicycle and walk it when the crowds start to thicken two to three blocks from the parade route. That includes the closed side of St. Charles Avenue. It will only set you back a few minutes and is safer (and nicer) than weaving through pedestrians.

Heavy drinking and biking do not mix. We know. One of the best parts of biking during Mardi Gras is being able to follow the party wherever it leads you. But use common sense. "Please, don't get on a bike if you can barely walk," Favre said.

Treat bicycles as you would another car. Yield the right of way when required, slow when there is no room to pass and keep an eye out for bicyclists in shared lanes (those are marked by a bicycle and two arrows). A side note: It is legal for bicyclists to ride side-by-side in pairs of two, though not recommended for bicyclists on busy streets.

Leave at least 3 feet when passing bicyclists. If you can't make enough room, do not pass. Being late stinks. Clipping a bicyclist and causing a collision is even worse.

Slow down. "Speed is the biggest killer when it comes to crashes for pedestrians and bikers," Favre said. Slowing from 40 to 20 miles per hour can save lives, he said.

Be aware when opening your car door. This goes especially for street side parking on a busy street or a street with a bike lane. Use the side view mirror to check for approaching bicyclists.

Be respectful. Be kind out there. It is against Louisiana law to honk at, yell, maliciously throw objects or otherwise harass someone on a bicycle.