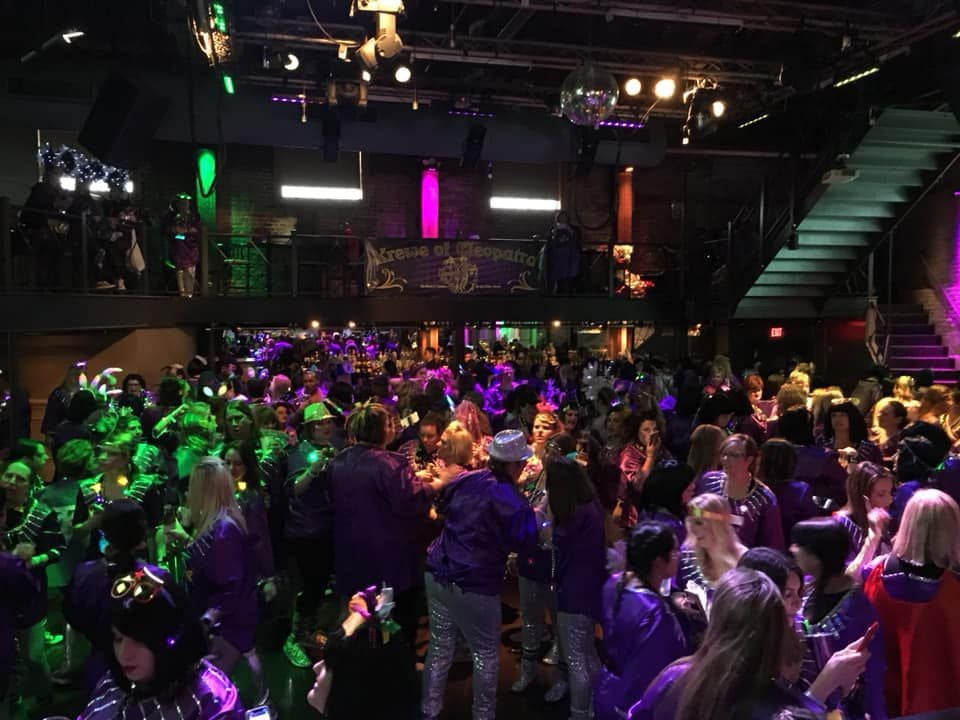 The 1,000 Krewe of Cleopatra members started the day off with a pre-party in Generations Hall before they paraded down the Uptown route on Friday, Feb. 22. 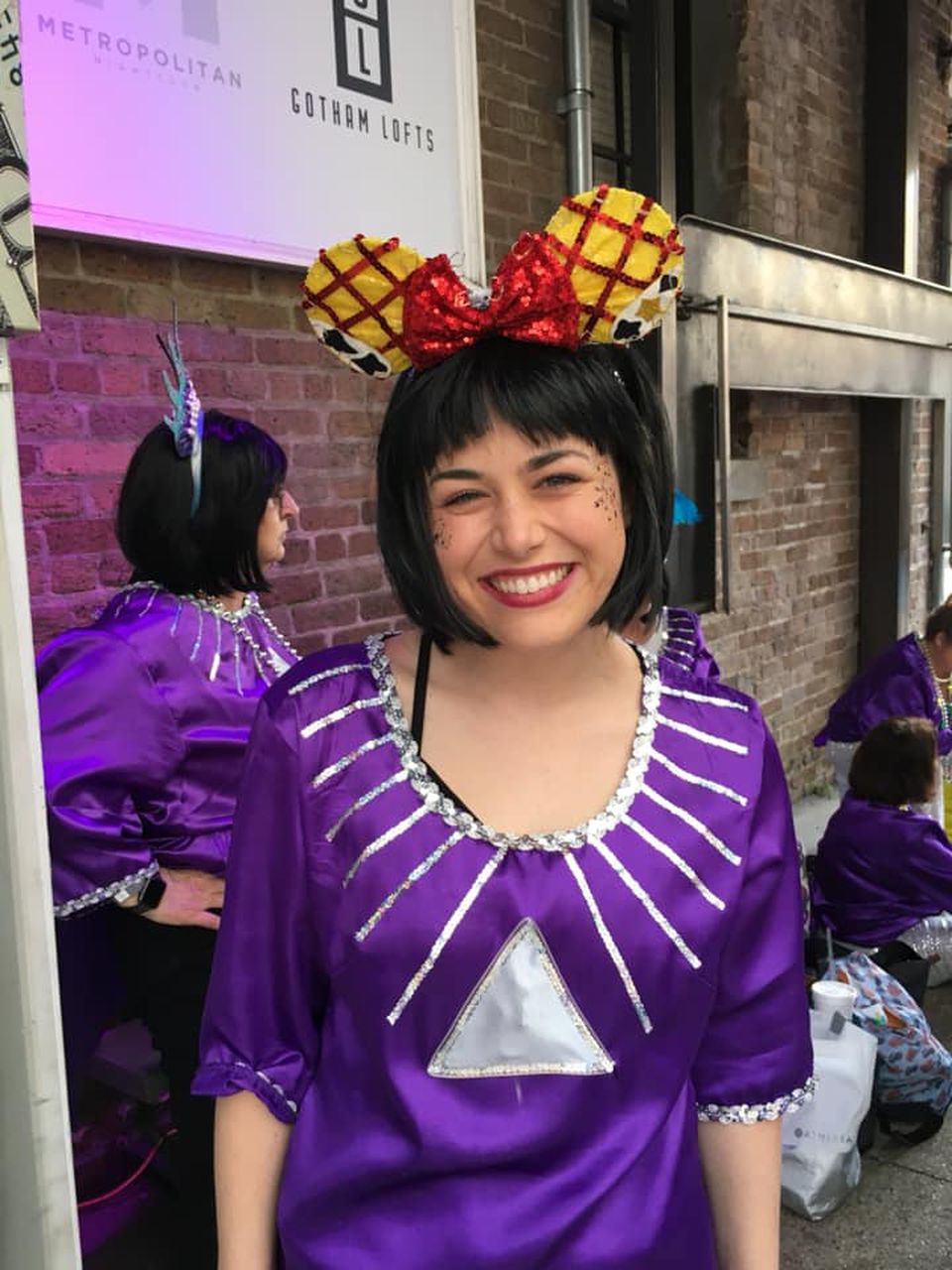 NOLA.com | The Times-Picayune reporter Laura Testino is dressed and ready to roll with the Krewe of Cleopatra on Friday, Feb. 22, 2019.

The 1,000 Krewe of Cleopatra members started the day off with a pre-party in Generations Hall before they paraded down the Uptown route on Friday, Feb. 22.

NOLA.com | The Times-Picayune reporter Laura Testino is dressed and ready to roll with the Krewe of Cleopatra on Friday, Feb. 22, 2019.

There were 240 hula hoops, and there was nowhere for me to stand.

My short black wig didn’t change my hula hoop–moving productivity much, but the light-up, Woody-from-Toy Story-themed headpiece over it did. I shed the headpiece and placed it in my own drawstring bag, snuggled up next to my snacks and my roll of toilet paper.

This was all very weird, and I hadn’t even chucked plastic at someone yet. I was just preparing my throws on a float the afternoon before the Krewe of Cleopatra hit the Uptown route, for what would, in fact, be my very first Mardi Gras float experience.

That says a lot of things, but what I hope it says most is that the first time I ever heard a hunk of shiny beads swish and clank as they fell from the sky and into someone’s fist, I was looking that person in the eyeballs from behind my silver mask and then threw my hands in the air like I’d just scored a touchdown in the Superdome.

“Now I get it,” I wrote in my notebook, which was sitting on the inside edge of the float, weighed down with a strand of blue and white medallion beads.

The day’s event kicked off with a pre-party at Generations Hall. “We’re big on throws,” one Cleopatra member told me shortly after I walked in. Little did I know.

When I walked in around 1:30 p.m., the hall was bumping to “Problem” by Ariana Grande and Iggy Azalea, and it felt “like a big slumber party,” noted my colleague, who was also riding in a float. All 1,000 of us were dressed in the same black wigs and purple satiny blouses but wearing different headdresses or leggings or face jewels to coordinate with float groups.

The last-call for indoor bathrooms was at 3 p.m. Then it was time to line up for a spot on one of the six-minute chartered bus rides over to the floats in a lot on Tchoupitoulas Street, where it was time to get serious. Or as serious as one can get when people are passing Jell-O shots over your head. I declined on account of those 240 hula hoops.

The actual beads that Mardi Gras is so famous for were buried at the bottom. On top were more throws, also organized by the dozen: 24 dozen stuffed animals, nine dozen purple light-up bouncy balls, four dozen special necklaces.

I soon gave up counting.

As my fellow riders consolidated their throws, they tossed the bags overboard to the parking lot below. Special beads shed their thin plastic wrapping and were draped on hooks on the inside of the float.

At the end of the next hour, my hands were covered in grey bead dust. I was sweating in the gorgeous 70-degree weather. We had lucked out. How did people do this drunk or in the rain or both? (I still don’t have an answer.)

After the 45-minute ride down Tchoupitoulas to Jefferson Avenue, we sat at Annunciation Street while the sun went down.

I posted to Twitter. And to Instagram. And to Facebook. I texted my mom. I ate some apples and blueberries. I thought about my dog at home. I read a funny tweet about it being 85 degrees outside. I ate the Goldfish and popcorn I’d brought. I spent too long staring at some light-up ice cubes in a go-cup. I finished my popcorn and Goldfish. I extracted a fake black wig hair out of my eye. I watched a man ride a motorized cooler-scooter toward the parade route. I realized my phone battery was at (yikes!) 34 percent, and then collapsed on the bags and bags and bags of beads.

“You gotta get up!” someone yelled to another rider who had fallen asleep. “We’re doing it!”

By the time we turned onto Napoleon Avenue from Magazine Street, I’d quit marveling and found my groove. I’d toss a few of each throw at a time, saving the special necklaces for the really excited parade watchers.

Everything was upbeat and neon and so dramatic. It was hard to not feel like the music being played was just for you, and this was a movie, and “End of Time” by Beyoncé was the stereotypical soundtrack to your life and not just the next song the Sirens of New Orleans were dancing to behind your float.

This was especially true when you connected on a throw: the beads would do that swish and clank, then dangle from people’s fists before they jabbed their arms up to the sky, each so excited about the catch.

I’d drape beads around the stuffed animals, adding a little weight and making it easier to guarantee that the person I’d made eye contact with was the person who’d catch the throw. I’d slam the bouncy balls on the side of the float, getting them to light up before tossing them down toward the sidewalk. The special necklaces were held over the edge a little longer, waiting to be spotted by someone below.

It wasn’t as easy throwing the hula hoops. The yellow, purple and green hoops were still sectioned off by the dozen. They were taped on two sides, and also held together with plastic ribbon.

My colleague and I didn’t have scissors, so we made use of a loose screw we found earlier in the day, poking it through the tape and the ribbon. We pulled off the tape, and eventually sawed the ribbon into little enough pieces that we could get to just a single hula hoop.

But what was the correct way from here? A light toss? Should I treat them like giant frisbees?

I tried to figure it out as the tractor continued tugging us down St. Charles Avenue.

When we reached the halfway point around Jackson Avenue, I picked up one of the hoops and dangled it over the edge of the float. It didn’t take long before a woman waving her arms made eye contact with me. I wiggled the hula hoop in her direction to give her a heads up that it was (hopefully) coming her way.

I released the hoop with a flick of my wrist. It cut through the air vertically in an arc, spinning and sailing down to the crowd.

It landed in the woman’s hands.