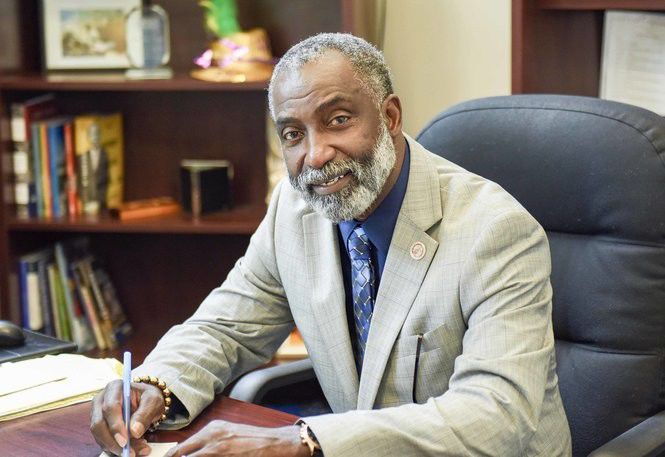 Tyrone Casby, principal of Landry Walker high school on the West Bank since 2016, began masking as a Mardi Gras Indian in 1967 (Photo courtesy of Armon Dauphin) 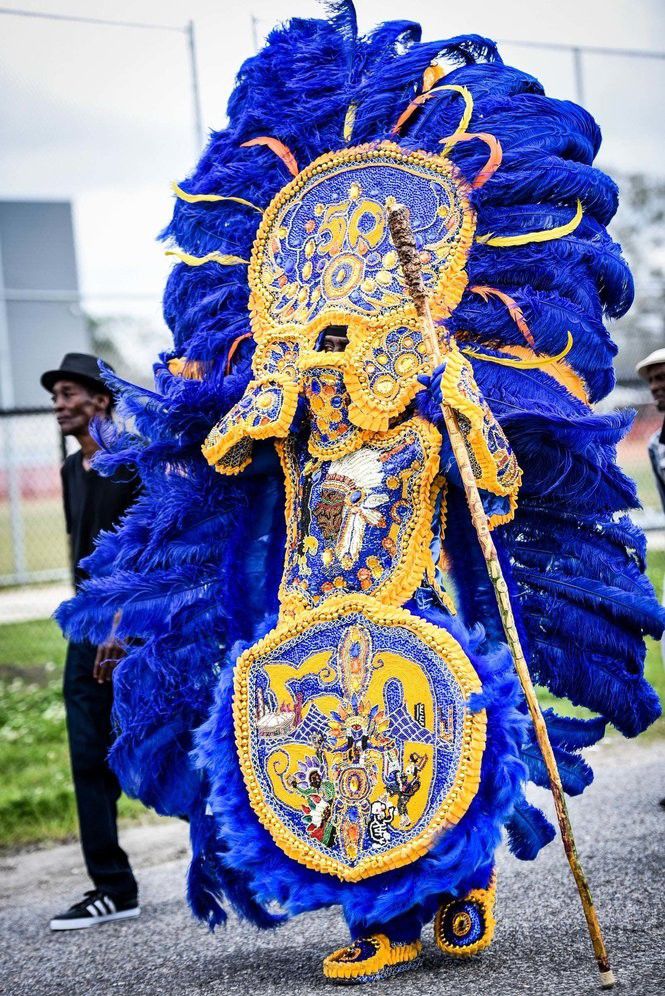 Tyrone Casby said that the Mardi Gras tradition is "deeper than the costume." (Photo courtesy of Armon Dauphin)

Tyrone Casby, principal of Landry Walker high school on the West Bank since 2016, began masking as a Mardi Gras Indian in 1967 (Photo courtesy of Armon Dauphin)

Tyrone Casby said that the Mardi Gras tradition is "deeper than the costume." (Photo courtesy of Armon Dauphin)

Tyrone Casby, principal of Landry-Walker High School in Algiers, cuts a striking figure in an elegant blue tie and pale gray suit. But at Mardi Gras time, Casby is even more attention-grabbing in a suit of another kind.

Casby, 63, started masking as a Mardi Gras Indian 50 years ago. On Friday, June 23, fellow maskers and friends are going to celebrate the half-century milestone at the Landry-Walker auditorium at 1200 L. B. Landry Ave., Algiers, from 7 p.m. to 9 p.m.

Casby said that his brother Ralph "Tickle Man" Casby preceded him in joining the Mohawk Hunters. As a teenager, Ralph played the role as the group's "wild man," which entitled Tyrone, who was almost 10 years younger, to tag along to Fox Park for practices.

Casby's first suit was a "mixture" of hand-me-downs and new embellishments. He says he borrowed some beadwork patches, which he added to a black dress shirt and pants. He edged everything in ribbons and fluffy trim. He bought some new black feathers on Rampart Street to match his shirt and pants, and added those to the turquoise feathers he already had. A Mardi Gras Indian was born.

Casby said he took a break from masking in the early 1970s. Pursuing a degree in education at Dillard University and starting a family didn't leave much time for sewing a Mardi Gras Indian suit. But by the end of the decade, he was ready to march again. In 1979, he hit the streets with the Mohawk Hunters anew.

Members of the Mohawk Hunters recognized that Casby was the man to lead the group into the future, so he was appointed Big Chief in 1980. Approximately 20 Hunters mask annually, he said.

Casby said he's not sure how much time he spends producing a suit each year. He said he'll get an idea in the summer and he'll have something started by September. Then he beads and stitches in his spare time until Fat Tuesday arrives.

"You always work more before Mardi Gras," he said.

His most recent suit includes bead mosaics of the Mohawk Hunters on the march, plus the portrait of a Native American chief. Above it all, on the headdress is the number 50. The suit is cobalt blue and glints with gold and sapphire-colored gems.

Casby said that the suits are an important part of the tradition, but "it's not just a bunch of guys dressed up in Indian suits; it has a deeper meaning."

Casby said that, for him, Mardi Gras masking reaches all the way back to Congo Square, where slaves were allowed to express their own cultures, and it reaches back to the street parades long practiced in African-American neighborhoods during segregation.

The suit, he said, "is just a facade; I'm expressing a spirit deeper than the costume."