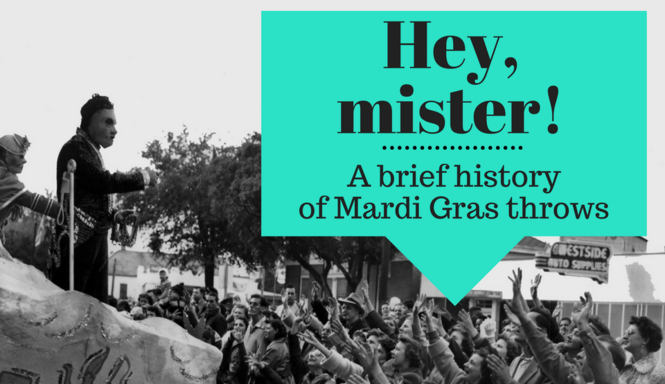 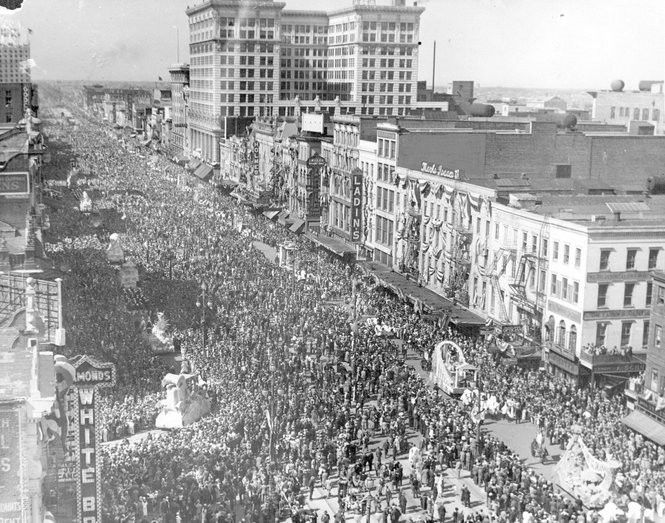 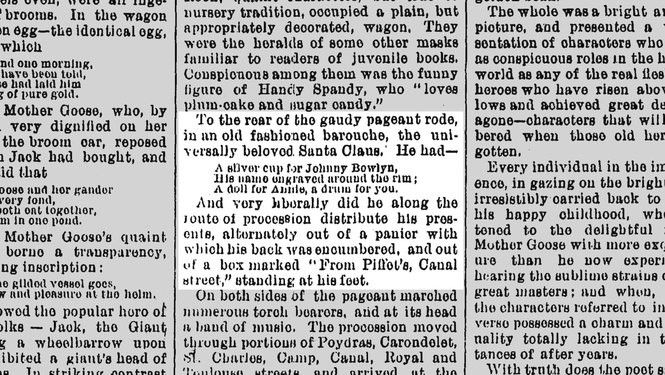 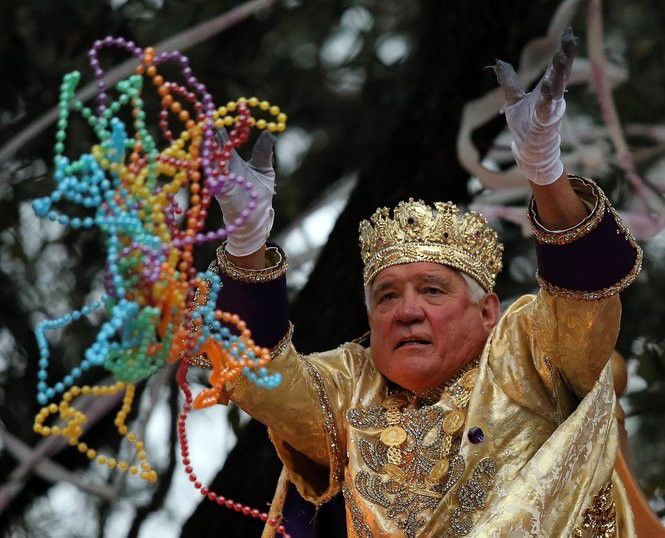 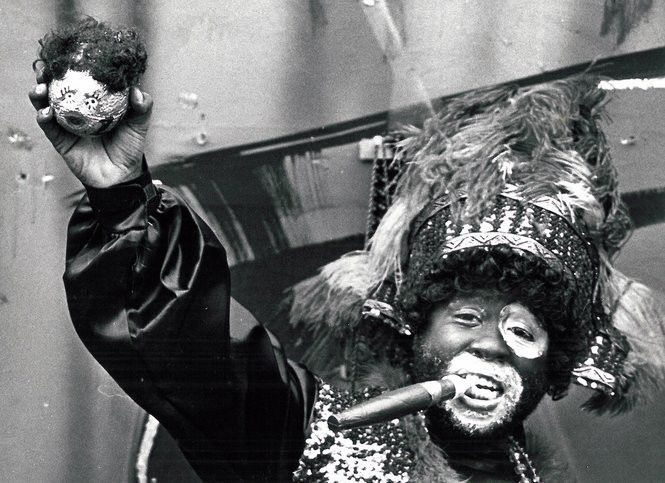 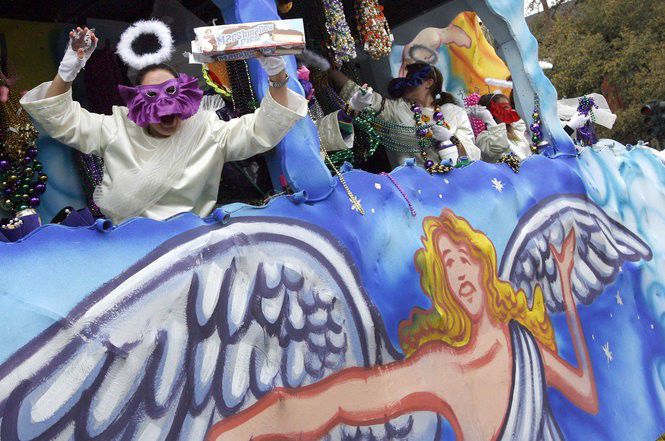 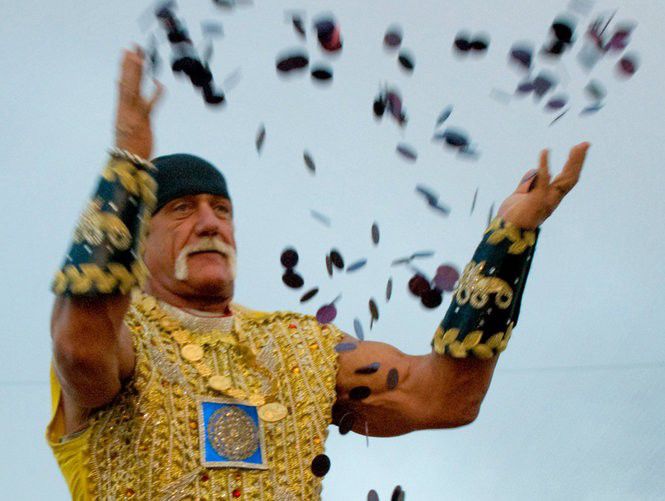 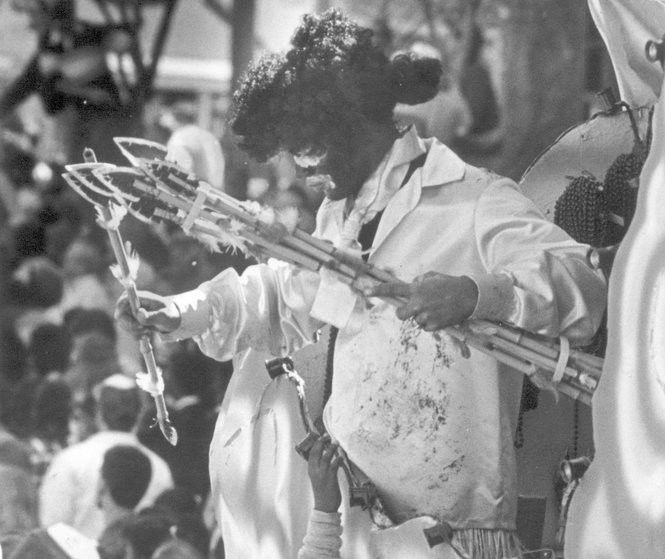 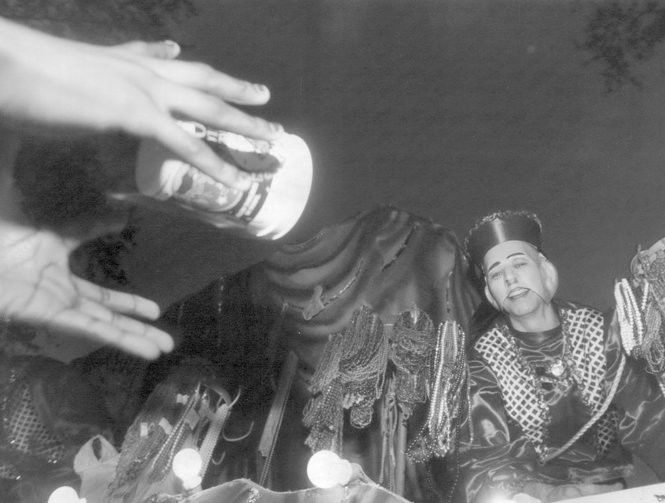 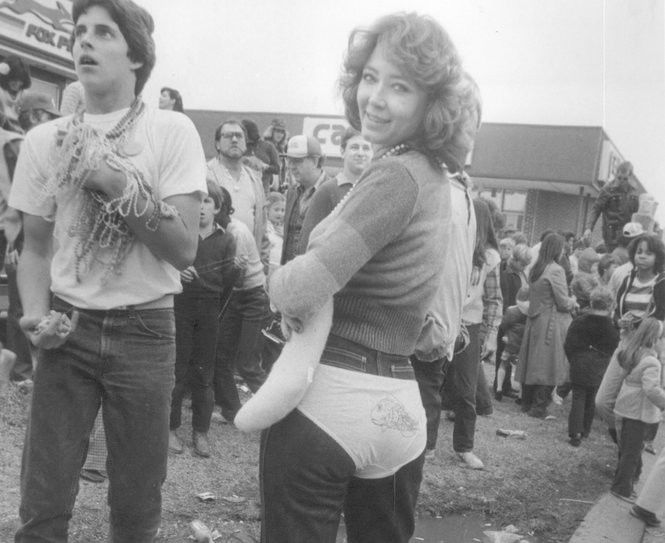 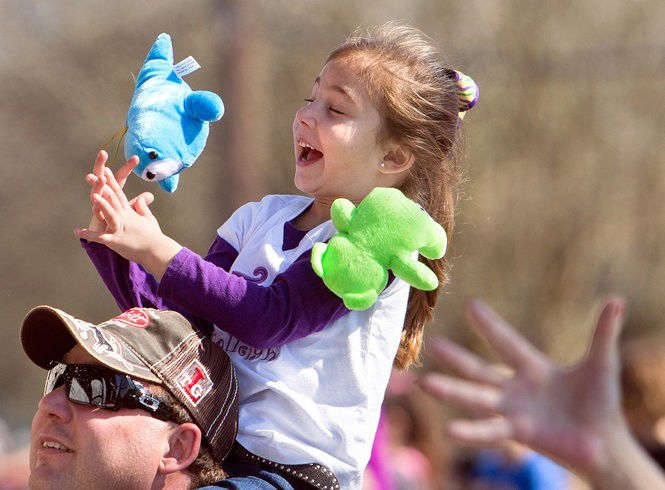 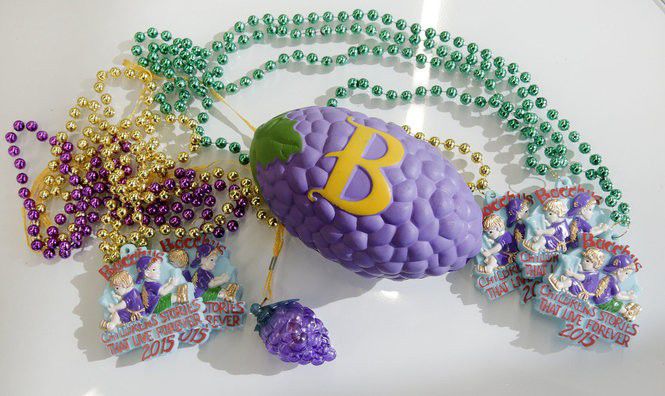 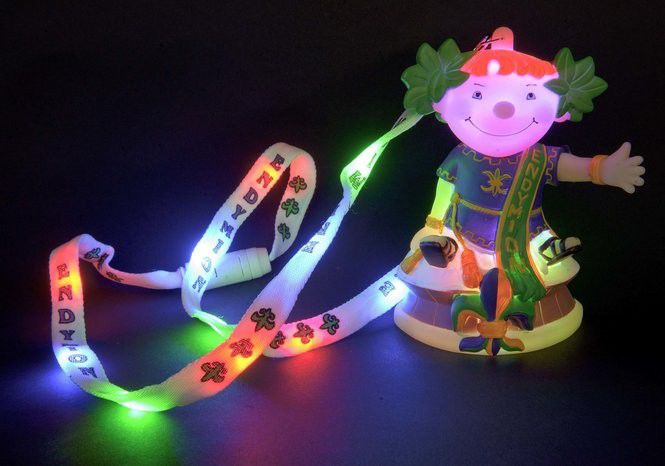 How Carnival throws caught on in New Orleans

You could argue that Mardi Gras parades in New Orleans are about more than just catching free stuff. You’d have a hard time convincing most Carnival die-hards of that, however. After all, it’s the pleading, the catching, the thrill of the one-handed snag that transforms parade-going in the Crescent City from a spectator sport (a la the Macy’s Thanksgiving Day parade) into a truly interactive experience. Like everything else, though, Carnival in New Orleans has evolved over time. Here’s a look back at the brief history of Mardi Gras throws.

Throw me something, Santa!

The first instance of trinkets being tossed from a “float” along a parade route is believed to have come as part of the Twelfth Night Revelers’ second-ever procession, on Jan. 7, 1871. The parade had a Mother Goose theme that year, but its last carriage carried a familiar face. As recorded in The Daily Picayune the next day: “To the rear of the gaudy pageant rode, in an old fashioned barouche, the universally beloved Santa Claus. … And very liberally did he along the route of procession distribute his presents, alternately out of a panier with which his back was encumbered, and out of box marked ‘From Piffet’s, Canal Street,’ standing at his feet.”

In 1921, the Rex organization required all of its riders to toss throws to the throngs, giving rise to that Carnival staple, the one thing you can be guaranteed to catch, and in quantity: beads. Alas, not all beads are created equal. Glass beads are desirable (as long as you catch them with your hands and not your face), as are beads with krewe emblems. Generic long beads are good, too -- and definitely better than the chintzy lightweight shorties that are too small for you to pull over your head without undoing the plastic clasp. Unless you are a grandma or you’re riding in a parade later in Carnival season, they are worthless the second they hit the neutral ground.

When the Krewe of Zulu started parading, the intention was to satirize the big old-line krewes that put so much importance on tradition. Ironically, Zulu would end up birthing one of the most beloved traditions of Mardi Gras: the Zulu coconut. Originally, riders handed out painted walnuts, called “golden nuggets.” In 1910, coconuts made their debut, although they were unadorned at first. Soon enough, riders began to decorate them, and a tradition was born. Zulu suffered a minor setback in the 1980s, when lawsuits from people claiming to have been injured by thrown coconuts created insurance headaches. Now, they are to be handed down from the floats, not thrown -- but they are still among the most cherished of all Carnival throws.

Putting the "mmm" in Mardi Gras

The handing out of food along parade routes actually pre-dates modern Mardi Gras parades, to the rowdy processions of the 1930s, with masked paraders on foot handing out "sugar plums, kisses, oranges, etc." That was taken to the next level in 1956, when riders in the Carnival parades of Mobile, Ala., began tossing moon pies from floats. The idea quickly caught on -- because who doesn't relish the occasional marshmallowy snack mid-parade? Today, the St. Tammany Parish city of Slidell even has its own walking krewe named after the delicacy: the Krewe of Mona Lisa & Moonpie.

It was a little chilly on the morning of March 1, 1960, and to make matters worse Gerald Andrus -- who reigned that year as Rex -- had forgotten his long underwear. Other than that, though, it was a fairly ordinary Mardi Gras morning. Or it appeared to be. What people didn’t know was that the riders of Rex were armed with 80,000 coins -- the first doubloons, and the first krewe-specific throws. It was a hit. Other krewes quickly adopted the collector-friendly throw, and an enduring Carnival tradition was born.

There are other trinkets to be had -- flying discs, fake cigars, plastic footballs -- but few non-krewe-specific throws have been able to match the popularity of the bamboo spear, complete with a rubber arrowhead-shaped tip and colorful feathers. (Almost as desirable is their smaller cousin, the bamboo tomahawk.) Selling for just a dollar a dozen in a 1978 ad in The Times-Picayune, spears have been known to whip crowds into a frenzy. They’ve also been known to be dangerous when hurled indiscriminately from a float, which has caused them to fall out of favor in certain quarters in recent years. Some krewes insist their riders hand spears down from a float -- a la Zulu coconuts -- rather than throw them. Other krewes have banned them entirely, with plush spears taking their places.

The West Bank’s Krewe of Alla is credited as the first parade to fully embrace plastic cups as a Carnival throw in 1980. Now, they’re everywhere, and for good reason. Few other throws combine collectability -- by virtue of the krewe logo branded on the side -- with practicality: You can use them right there on the parade route (the booze will kill any germs), or you can take them home and use them to hold everything from coins to paint thinner to bourbon. (Careful: Don’t mix those last two up.)

What’s Carnival without a little bawdiness? Enter the idea of throwing panties emblazoned with krewe names, a tradition that took root in the mid-1980s. (A close relative: the garter belt, which is less naughty but which is guaranteed to fly farther if shot like a rubber band.) Caught a pair? Pull ‘em on right over your pants and keep catching whatever else is being flung your way. Wear them on your head if you must, but be aware that doing so turns you instantly into a Carnival cliche.

Stuffed animals have long been popular. Not only are they relatively inexpensive to buy and easy to catch, but seeing the face of a child light up when they snag a stuffed bear, alligator or crawfish makes it all as rewarding for parade riders as for parade-goers. In recent years, branded plushes have caught on in a big way, from stuffed version of Rex’s Bouef Gras to little stuffed tridents from Proteus to the Krewe of Iris’ stuffed king cake babies.

Given the popularity of krewe-branded cups and doubloons, it was inevitable that parading groups would decide to put their brand on pretty much everything imaginable, leading to the proliferation of a new class of throw in the past decade or so: branded miscellany. Tucks has rolls of toilet paper with its logo. Muses has been known to throw pedicure kits. Bacchus has thrown footballs shaped like bunches of grapes. The list of admirably creative specialty throws is endless -- and it grows every year.

Inspired by the handcrafted aesthetic of Zulu’s hand-decorated coconuts, members of the all-female Krewe of Muses around 2001 started their own tradition of decorating shoes -- with beads, glitter, feathers, rhinestones, whatever strikes them as suitably fabulous -- and handing them out to parade-goers. The idea caught on, and now Muses shoes are highly sought after. Other krewes have adopted similar DIY traditions, such as the Krewe of Nyx’s hand-decorated purses and Iris’ sunglasses.

Nighttime parades have always held an aesthetic edge over their daytime counterparts due the drama introduced by lighted floats. In recent years, that edge has only grown more pronounced, thanks to ever-tinier batteries powering a litany of lighted throws, from beads to balls to pretty much anything big enough to fit a krewe logo.